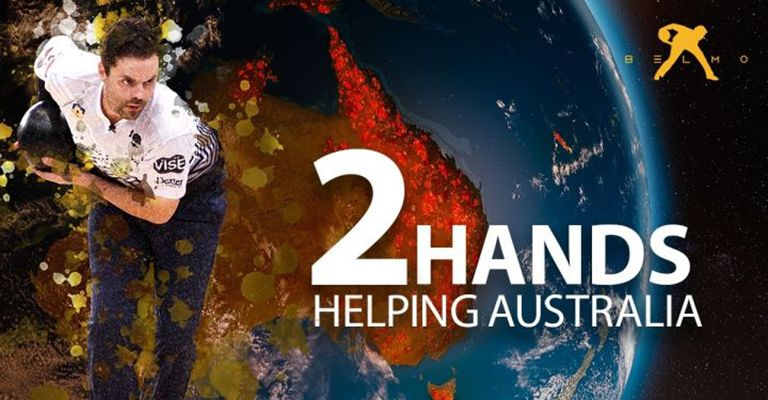 The tragedy of lives and property lost during Australia’s summer bushfire season shocked and saddened people across the globe.

In January, when Aussie tenpin bowling legend Jason Belmonte set up a GoFundMe site to raise funds for those affected, the bowling community responded generously. Donations flowed in from individual players young and old, Centres, associations and bowling leagues, and many of his famous colleagues on the PBA Tour.

Led by Tour owner, Bolero Corporation and STORM Bowling Products, the company Belmonte has represented throughout his PBA career, industry corporates also dug deep with multi-thousand-dollar donations to help Belmonte raise a total of US$145,126 – within a whisker of his US$150,000 goal. And, converted to Aussie dollars, close to AU$240,000 in support of his three nominated charities – WIRES Australian Wildlife Rescue, the NSW Rural Fire Service and the Australian Red Cross.

Belmonte kicked off the fundraiser with a pledge to donate US$50 for every strike he bowled during the PBA FOX season, and doubled it with a bonus of US$100 per strike when progressing to any televised final round on FOX. This boosted the tally when Belmonte made five televised finals, culminating with his third consecutive PBA World Championship title and 13th Major in Las Vegas recently.

“After making the pledge to donate for every strike I roll this PBA season, I was compelled to do more to help my country. “We’ve started a GoFundMe campaign that will help families, fire fighters, the koalas and all the animals all across Australia …. it is my way of asking all of the bowling communities, the fans and my friends to help my country, by supporting our efforts in fighting the fires, and eventually rebuilding from this devastation,” Belmonte announced.

Renowned for his unconventional but increasingly popular two-handed bowling style and unprecedented success in continually re-writing the sport’s record books, 36-year-old Jason Belmonte is now applauded as the best bowler on the planet. Avidly followed by fans worldwide, he has an online following of hundreds of thousands across numerous social media platforms, and literally millions of views on YouTube are testimony to his popularity and influence.

Belmonte and his family have now returned to his home in regional Orange, New South Wales and are close to finishing their regulation 14-day period of isolation. Determined to stay at the top of his game despite the challenges that now prevail, Belmonte is busy juggling home schooling duties, home-based exercise workouts and mowing the lawn while keeping in regular contact with his international fan-base.

While his bowling shoes are in temporary storage at the back of his wardrobe, Belmonte can’t wait till he can ‘lace ‘em up’ and resume playing the sport he loves – along with millions of other bowlers worldwide.

“All funds collected so far are being distributed regularly to the three charities via the GoFundMe system”, Belmonte explained. “Of course, while the PBA Tour is in hibernation I’ve put the fundraiser on hold, but keen to reactivate it when the PBA Tour resumes and get over the goal line … hopefully I’ll make a few more TV finals to top up the total as well,” he added with a grin.